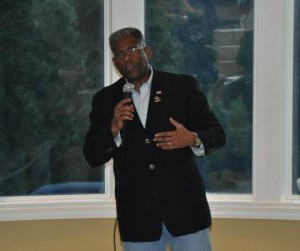 Congressman West will be participating in the following Thanksgiving events:

SIGN UP TO RECEIVE ALL CONGRESSMAN ALLEN WEST’S E-NEWSLETTERS

– Improving Small Business Capital Formation — On Thursday, the House approved H.R. 2930, the Entrepreneur Access to Capital Act, by a vote of 407-17, I VOTED YES. The bill would remove SEC restrictions on “crowdfunding” so entrepreneurs can raise capital from a large pool of small investors who may or may not be considered “accredited” by the SEC. H.R. 2930 would permit “crowdfunding” to finance new businesses by allowing companies to accept and pool donations up to $5 million without having to register with the SEC.

Also on Thursday, the House approved H.R. 2940, the Access to Capital for Job Creators Act, by a vote of 413-11, I VOTED YES. The bill would remove the regulatory ban that prevents small, privately held companies from using advertisements to solicit investors—a Depression-era regulation that unnecessarily limits the pool of investors and severely restricts the ability of small companies to raise capital. Both of these bills would change and update Securities and Exchange Commission (SEC) regulations to promote, rather than hinder, small business access to equity financing—a key mechanism for business expansion in light of tightened lending standards which make a commercial bank loan an increasingly difficult option.

– Monday, 31 October, Happy Halloween, flew back to Washington and welcomed the Fort Lauderdale Chamber Fly-In with a fireside chat at the Wasie Foundation.

allenwestforcongress.com to DONATE AND VOLUNTEER

west.house.gov for ALL Constituent Services, E-Newsletters, Issues and more

Freeland, a Mercersburg, Pa., resident, started paying attention to the freshman congressman’s interviews in the national media months ago. He was excited to learn West would be visiting Franklin County.

“I think he speaks very directly. He speaks from a good, solid background,” Freeland said.

U.S. Rep. Bill Shuster, R-Pa., said he invited West to attend the event at Green Grove Gardens after the Franklin County GOP asked for assistance in finding a speaker. Shuster and West both serve on the U.S. House of Representatives Armed Services Committee as well as a newly formed panel that focuses on defense spending and private businesses.

“He says what he thinks,” Shuster said of West. “That’s his style, and it works very well.”