Published on Jul 26, 2012 by AllenWestForCongress 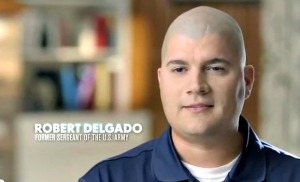 My name is Robert Delgado, and I am a former Sergeant in the United States Army. I want to share the story of my experience with Allen West, because I want to make sure you know what kind of a man he is.

During Operation Iraqi Freedom, Lieutenant Colonel Allen West was my commander.  When we got our orders to go to Iraq, my wife was eight months pregnant, and it was nerve-wracking leaving her and not knowing if I would live to see my child.

At that time, when we went into Iraq, many of us were not outfitted with body armor.  But Allen West assured me, “I will make sure you come home to your wife and your newborn baby.”

Lieutenant Colonel West gave me his own personal body armor.

One night we were driving on patrol. Suddenly, a car came speeding at us and we began taking small arms fire. I was shot in the chest.

If I hadn’t been wearing Allen West’s body armor, based on where the bullet hit, I believe I would have been killed.

Political opponents are trying to paint a dishonest picture of Allen West. But I know he is a true patriot. He put his men first then, and he continues to put his country first now.

We need a leader like Allen West in Congress – a man with the honor, integrity and the courage to fight. Our country’s future depends on it.

Please SHARE and Tweet this ad with your family and friends and people across Martin, Palm Beach and St. Lucie Counties.  They need to know the kind of leader Allen West really is.

Thank you for standing with us.

Former US Army Sgt. Robert Delgado was assigned as the driver for Lt. Col. Allen West during Operation Desert Shield in Irag. Here Sgt. Delgado tells the story of how his life was saved by Allen West, his commanding officer.

Uploaded by AllenWestForCongress on Jul 18, 2012

Help return a combat veteran and principled conservative to Congress. Donate $10, $50, $100 or $250 now!:https://www.allenwestforcongress.com/contribute/