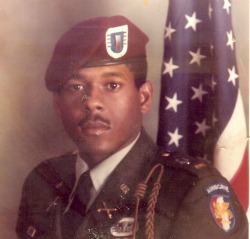 Two hundred and sixteen years ago on this day, in 1797, a Frenchman named Andrew Garnerin became the first person known to jump with a frame-less parachute. Interestingly, the first female parachutist was his student Jeanne Geneviève Labrosse, who later became his wife. Little did Garnerin know he would be the inspiration for a new generation of soldier: the Sky Trooper, Airborne, the Paratrooper.

I am honored to be counted as one of those who have braved the fear of jumping from an aircraft while in flight, a storied history that bonds men and women from countries far and wide. American military history remembers its great Airborne units who have made such incredible combat operations as Salerno, Normandy, Market Garden, Tagaytay, Corregidor, Sukchon, Junction City, Grenada, Panama, Iraq, and Afghanistan. The lineage of the Airborne trooper is interwoven into modern American history, and it extends across all branches of our services: Navy, Marine Corps, and Air Force. Monsieur Garnerin undoubtedly had no idea that his simple stunt would result in the development of a new strategic military tactic, giving rise to the motto of all American Paratroopers regardless of age, “Airborne, All the Way.”

However, the greatest testimony to the Sky Soldier comes from the words of a towering leader from World War II, British Field Marshal Bernard Law “Monty” Montgomery, 1st Viscount Montgomery of Alamein:

CONTINUE THE REST OF THE STORY HERE: