Sebelius: Don’t Do This To Me! – She Doesn’t Want Obamacare Why Must Americans – On The Record

Wake The Hell Up America Your Republic & Freedom In Grave, Grave Danger
Sebelius: Don’t Do This To Me! – She Doesn’t Want Obamacare Why Must Americans – On The Record 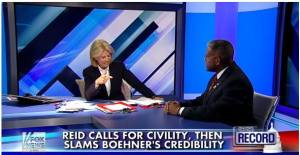 Last night the fella from Atlanta’s Old Fourth Ward was the lead off guest for Fox News’ new evening lineup starting with Greta von Susteren.Ten years ago I was just a simple Artillery Battalion Commander leading American soldiers in Iraq. I am constantly amazed at how exceptional America truly is because of the sense of equality of opportunity that means regardless of where you are born or come from, high achievement is attainable. However, on the O’Reilly Factor last night Bill posed a question to Juan Williams about the morality of hurting one to elevate another. It reminded me of the Karl Marx quote, “From each according to his ability to each according to his needs.” The counter to America’s promise of equality of opportunity is the progressive socialist vision, led by Obama, of equality of outcomes. This is the dilemma in which America finds herself engaged. Shall we continue to be a Republic that promotes opportunity for its citizens or shall we devolve into a communal society mandated by those who will determine our path? I choose the former, what say you?

Former Florida Congressman Allen West joined ‘On the Record‘ tonight to weigh in on the continuing budget battle in Washington.  He told Greta Van Susteren that lawmakers are “playing politics” with the American people by not trying to solve the problem with the government shutdown.

The fighting in Washington continued today, as Sen. Harry Reid’s spokesperson issued a statement blasting House Speaker John Boehner for having “a credibility problem” and refusing to “come to grips with reality.”

West argued that if Bill Clinton and Newt Gingrich could work together to create a budget surplus, reform welfare and Social Security, we should be able to do it today.

“We just found out that 800,000 federal employees were classified as non-essential,” West said.  “So what does that say?  It just says that this thing that we call the federal government has grown leaps and bounds out of control.”

He contended that everyone has responsibility in this fight. “I believe that the Republicans need to do a better job of articulating policy and what it means in the long term for the American people and for hard working American families out there,” West said.

“I think the Democrats have to get away from this ‘playing politics’ where they’re concerned about ‘we want to win back the House, we want to make sure we keep the Senate’ so that the president’s last two years can be like his first two years.  They’ve got to come together and understand what’s best for the American people, not what’s best for their political party.” 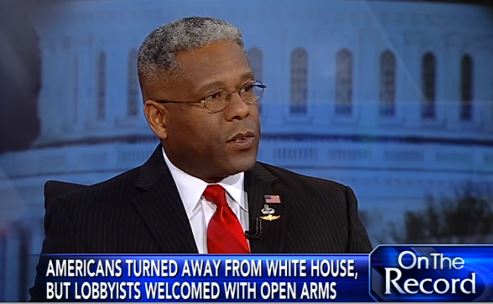 @AllenWest with @gretawire discussed is ‘The People’s House’ only for lobbyists? – Pres. Obama eliminated public tours of the White House as part of the sequester, but hundreds of K Street lobbyists have continued to have access.

As our economy takes an unexpected fourth quarter hit, Allen West goes “On the Record” with Greta to discuss our shrinking economy. 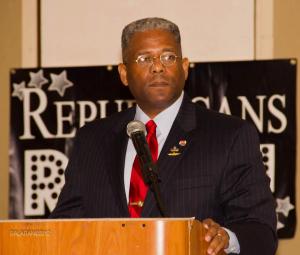 via Allen West on Facebook: Tonight I’ll be going On The Record about my next chapter exclusively with Greta Van Susteren at 10 pm ET. Please tune in if you can!

Greta and Allen West discuss the mess that is leading us to the fiscal cliff and the immediate rejection of the Republican’s offer by President “let’s nosedive off the cliff” Obama. 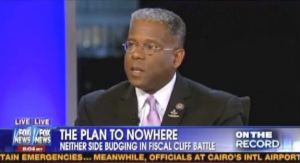 “An incredible journey,” U.S. Rep. Allen West said of his first two years in Congress. “This is a dream come true for a kid born in the inner-city of Atlanta.”

Sitting in his Washington, D.C., office, surrounded by pictures of his family, military mementos and history-themed books, the outspoken freshman congressman spoke with a sense of awe about the status he’s achieved as Florida’s representative on Capitol Hill.

A frequent Fox News guest, West said he has been most surprised by the regard he’s been afforded on the national stage. Over the next hour, he was reflective of a journey that began just two years ago, when he was first elected to Congress.

“It’s been very humbling and very honoring,” said West, who was scheduled to sit down with Fox commentator Greta Van Susteren after this interview last week with BizPac Review.

When asked whose personality pleasantly surprised him in Washington, he said he has been most impressed with fellow Congressman Dennis Kucinich, D-Ohio.

“He and I have really got an incredible relationship – mutual respect – and it started back with the whole fiasco with us going into Libya, the violation of the War Powers Act,” West said. “I am always looking to align myself with those who would stand on principle, and that’s exactly what he did.”

COMPLETE THE REST OF THE INTERVIEW AND SEE EXCLUSIVE PHOTO’S OF CONGRESSMAN WEST’S DC OFFICE BY CLICKING HERE: BIZPACREVIEW.COM

Congressman West talks about his disapointment with the President’s new defense strategy. 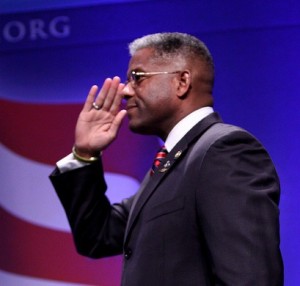