The Allen West foundation contributes $2,000 to the Bossier Sheriff’s Young Marines, and hosts a pizza luncheon.

CLICK HERE AND READ MORE ABOUT THE ALLEN WEST FOUNDATION

American Majority, in partnership with the Allen West Foundation, is pleased to announce our New Leaders Summit
OCTOBER 11 – 12, 2013 in Philadelphia, PA

American Majority’s New Leaders Project is designed to motivate and equip the hard working citizens across each state to become part of the solution to the problems that they see every day in their communities.

Allen West, will be our featured keynote speaker at the Friday Dinner.

Cost: 50.00 for Friday Only Dinner with Allen West
40.00 for Saturday Only Summit Training
70.00 for both Friday Dinner and Saturday Training

Stay for the Muster and Ceremony at 1100hrs

The primary objective of the Allen West Foundation is to educate and inspire the next generation of conservative leaders among the minority and veteran communities.

In 2010, Colonel West once again reaffirmed that oath when he became the first black Republican from Florida to serve in the United States House of Representatives since Reconstruction.

The Foundation bearing his name was established to encourage others to follow a similar path of commitment to our nation and its constitutional principles. 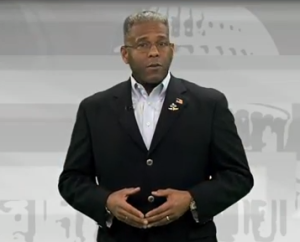 Sundown tonight marks the beginning of Passover and the Seder.

While we all come from different faiths and backgrounds, each of us can learn much from this Jewish holiday commemorating the struggle of the Jewish people over 3,000 years ago, their emancipation from slavery in Egypt, receipt of the Torah at Mt. Sinai, and establishment of their homeland in the Promised Land.

The eight day feast of Passover is a time when Jewish people reflect upon the story of their ancestors and retell it, parent to child, to ensure the love of liberty is passed on from generation to generation.

The Jewish people’s liberation from tyranny is not so different than ours as Americans. Our Founding Fathers fought the British monarchy so that we could enjoy the fruits of our labors and the liberties they believed were inherent to all human beings. But today, too many of us have lost sight of this and our freedoms seem not to be cherished as they should. This is abundantly evident in our political system that seeks to take away the very liberties enshrined in the Constitution-the right to bear arms, freedom of religion, freedom of speech, and more.

So today, as we wish our Jewish friends a happy Passover, let us also reflect on the freedoms so many have fought to preserve in our own nation, and ensure the love of liberty is passed on to our future generations.

The Allen West Guardian Fund was established as a PAC to support conservative military veteran and minority Republicans running for state and federal office, in the same vein as Allen West.

In 2010, Colonel West once again reaffirmed that oath when he became the first black Republican from Florida to serve
in the United House Representatives since Reconstruction.

Forty years ago, 72% of House lawmakers and 78% of those in the Senate had served in the armed forces. Veteran representation on Capitol Hill has been steadily declining since the early 1970s, largely a result of the World War II generation steadily leaving public office. But those who have served in the military have a better understanding and a deeper comprehension of issues involving national security, armed services and veteran issues –issues no less important now than they were 40 years ago.

Colonel West was one of only four black Republicans to serve in the United States House of Representatives in nearly a century. In the Senate, there have been only two. As the demographics of the U.S. population shift, it becomes ever more critical to increase representation by not only black, but Hispanic and Asian American leaders as well.

The leadership PAC Colonel West established during the 2012 election cycle with the same mission helped 7 military veteran candidates win their seats in the House of Representatives.

We must ensure conservative leaders are elected who will stand as guardians of our constitutional republic, to restore our nation’s fiscal responsibility and strong national defense, limit the growth of government, unleash the free market and preserve the liberty and sovereignty of its citizens.

Former Rep. Allen West has no plans to run for reelection — but he wants to help conservative minorities and military veterans win seats in Congress.

“I asked myself, ‘How can I help the next generation of minority conservatives?’” West told TASin an interview. “I could go back and try to get back into Congress. But it’s not about ‘I.’ there’s no ‘I’ in team.…If you’re going to do what’s right by ‘Team America’, it means getting constitutional conservatives, getting people that can make a difference — especially when the other side is saying this is just the party of old white guys.”

“This country used to look to the military for elected leaders,” West said, “and we want to help change that again.”

The Guardian Fund takes off from West’s earlier contributions that helped 13 military candidates win in the 2012 election.

CLICK HERE TO READ THE REST OF THE ARTICLE:

The Spectacle Blog on The American Spectator

Boca Raton, FL – Former United States Congressman and retired Lt. Colonel Allen West today announced the launch of The Allen West Foundation, a Section 501(c)(4) non-profit organization with the mission of educating and inspiring the next generation of conservative leaders within the minority and veteran communities nationwide.

A government truly “of the people” must be fully representative of those it governs. Both minorities and veterans are under-represented in elected office at both the state and federal levels, and the Foundation seeks to educate and motivate members of these groups to increase their civic participation and representation in government.

“From the time I first took an oath to support and defend our Constitution as a young Second Lieutenant in the United States Army, I have committed my life to our nation and its constitutional principles,” said West, “I feel both a duty and an honor to encourage others to follow a similar path.”

The Allen West Foundation will:

For more information about The Allen West Foundation, visit www.allenwestfoundation.org.