This evening Tanya Grimsley of Allen West Republic – Joined Kira Davis on “The Dark Side” to discuss Congressman Allen West and the election issues and voter discrepancies in Florida’s 18th Congressional District as well as the rest of the nation.

CLICK HERE TO LISTEN: KIRA DAVIS HOSTS THE DARK SIDE

“We are after the truth of what votes were cast by voters in St. Lucie County, and the conduct of the canvassing board today casts doubt on their reported numbers.

The St. Lucie Canvassing Board’s abrupt action today was reached entirely without explanation or justification.  The Campaign was informed on Saturday afternoon, while the Board met in an apparently private and unannounced session, that a decision was reached to recount all ballots cast during early voting.  There was absolutely no explanation of what events or evidence before the Board triggered this voluntary recount. The Supervisor’s website still includes its last-minute public notice of a full recount of early votes:

That is not what happened today.  Again without any warning or notice, the Board announced this morning that it would count only the early votes cast on Nov. 1, 2, and 3.  The explanation given at this point was that the four data cards in use on those three days of early voting did not upload properly on Election Night.  However, the Supervisor and the Board said on Election Night and at Thursday’s canvassing board meeting that the four “compromised” data cards were actually taken from vote counting machines in use during the first three days of early voting.  By the close of today’s meeting, the Board again changed its position to explain that the decision to recount only early vote ballots cast on Nov. 1, 2, and 3 was at the direction of “Tallahassee.”

Adding to this confusion is the Supervisor and Canvassing Board’s continued refusal to produce any means of verifying their count. The records of poll book data for early voting requested of the Supervisor and the Board would allow anyone to match the number of votes and number of voters.  The candidates and the public have no way of knowing that the number of persons who voted in this election is equal to the number of ballots counted.  The critical information contained in early voting poll book records is as necessary to certification of results as it is simple to produce. The Supervisor and the Board continue their attempts to hide the facts and after today’s events, their conduct and inconsistent behavior cast even more doubt on the St. Lucie County’s election returns.” 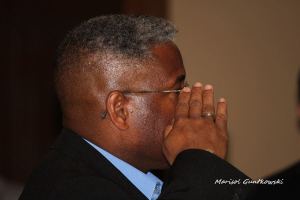 “Tomorrow morning at 7:00 a.m., the St Lucie County Supervisor of Elections will recount all early votes cast in St. Lucie County. West for Congress is pleased with the Supervisor’s decision, as the counting of early votes on Election Night was of great concern to our campaign, given the large shift that occurred at midnight of nearly 4,000 votes.

This decision should help shed light on the situation of this election. This is the action we were seeking to ensure the results of this election were fair and accurate.

While we still look forward to reviewing the poll books used to check in voters during early voting and Election Day, this recount goes a long way to ensuring an accurate outcome.”

FOR IMMEDIATE RELEASE
November 10, 2012
Contact:  Michele Hickford
(772) 600-7123
or Michele @AllenWestforCongress.com
Race for Florida’s 18th Congressional District Remains Undecided Stuart, FL – Today West for Congress released the following statement regarding the state of the race in Florida’s 18th Congressional District:“With all provisional and absentee votes counted in the 18th District, Congressman West currently trails by roughly 2,400 votes, a margin outside of the threshold for an automatic recount. The race remains undecided because there are issues that still need to be resolved in St. Lucie County.  Late on Election Night, Congressman West led by 1,700 votes. Following the St. Lucie County Supervisor of Elections’ decision to recount thousands of early ballots after a technical glitch, the margin shifted by 4,000. In order to ensure that votes were not doubled counted, we have requested that the St. Lucie Supervisor of Elections make public the poll check-in books to ensure the numbers of ballots cast matches the numbers of voters checked-in at the polls. Once that information is provided we believe the outcome of the election will be clear.  It is troubling that days later that information is still not available.  Our sole focus is ensuring all ballots were counted fairly and accurately.”
PLEASE SEE THIS LINK WITH VOTER TURNOUT NUMBERS: Washington Times – Florida Twist

Congressman Allen West issued this statement via Facebook:
Our race is far from decided and there is no rush to declare an outcome. Ensuring a fair and accurate counting off all ballots is of the utmost importance. There are still tens of thousands of absentee ballots to be counted in Palm Beach County and potential provisional ballots across the district. Late last night Congressman West maintained a district wide lead of nearly 2000 votes until the St. Lucie County Supervisor of Elections “recounted” thousands of early ballots. Following that “recount” Congressman West trailed by 2,400 votes.
In addition, there were numerous other disturbing irregularities reported at polls across St. Lucie County including the doors to polling places being locked when the polls closed in direct violation of Florida law, thereby preventing the public from witnessing the procedures used to tabulate results. The St. Lucie County Supervisor of Elections office clearly ignored proper rules and procedures, and the scene at the Supervisor’s office last night could only be described as complete chaos. Given the hostility and demonstrated incompetence of the St. Lucie County Supervisor of Elections, we believe it is critical that a full hand recount of the ballots take place in St. Lucie County. We will continue to fight to ensure every vote is counted properly and fairly, and accordingly we will pursue all legal means necessary.

Lieutenant Colonel West (U.S. Army, Ret.) is best known for his service to his country, being awarded a Bronze Star, three Meritorious Service Medals, three Army Commendation Medals, and a Valorous Unit Award in a career spanning over twenty years. LTC West’s defense of liberty extends beyond the battlefield, however, as his commitment to support and defend the Constitution is the driving force behind his career in Congress.

What does this American patriot and hero think about the Second Amendment? “An armed and informed law-abiding citizenry is the best defense against an unjust government and the criminal element created by irresponsible societal benevolence and activist judges.” His position on the right to keep and bear arms is as politically incorrect as it is in keeping with the original intent of the founding fathers.

Gun owners and sportsmen throughout the country will continue to have a strong ally in the U.S. Congress with Allen West. Allen West is a consistent and strong advocate for Second Amendment rights who respects the Founding Fathers and their pledges of lives, fortunes, and sacred honor.

Gun Owners of America Political Victory Fund enthusiastically supports Allen West for Congress and encourages gun owners and sportsmen throughout the 18th District to work hard to reelect this pro-gun champion in November.

Battle In Florida – Dems And GOP Lawyer Up For Early Voting – Allen West Weighs In! Obama Vs Romney

Published on Nov 4, 2012 by AllenWestForCongress

There’s less than two days left until Election Day. Be sure to show up to the polls and vote.

Glenn speaks with Allen West about his race in Florida