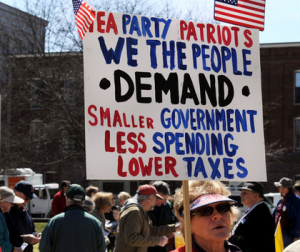 The Republican Coffee Corner with Angela’s

The Party Most Vilified: The Tea Party Movement Part 1

The Tea Party movement is a political organization/movement adhering to three tenets: (1) adherence to the United States Constitution; (2) Reduction of Government Spending and thus taxes; (3) Reduction of the U.S. National debt and federal budget deficit.

This movement can be considered in equal measure conservative/libertarian/populist. A relatively new movement, it has supported candidates since 2009. As with anything new, the level of “gnashing of teeth, head banging, weeping and wailing” has been heard throughout the land —- and that is just among the old “checkered pant” Republicans. (smile — I love checkered pants as much as the next person).

While many politicians who have been involved with the Tea Party are registered Republicans, it is argued that they do not have to be. A commitment to the three aforementioned principals are necessary to be a part of this movement. Repeat, it is not a separate Party as such, it is a MOVEMENT.

I got this next area from the Wikipedia:

The Contract from America was the idea of Houston-based lawyer Ryan Hecker. He stated that he developed the concept of creating a grassroots call for reform prior to the April 15, 2009, Tax Day Tea Party rallies. To promote his idea, he launched a website, ContractFromAmerica.org, which encouraged people to offer possible planks for the contract. The top ten planks were decided by online voting at Hecker’s website (approval rates shown in parentheses below):

Identify constitutionality of every new law: Require each bill to identify the specific provision of the Constitution that gives Congress the power to do what the bill does (82.03%).

1. Reject emissions trading: Stop the “cap and trade” administrative approach used to control pollution by providing economic incentives for achieving reductions in the emissions of pollutants. (72.20%).

2. Demand a balanced federal budget: Begin the Constitutional amendment process to require a balanced budget with a two-thirds majority needed for any tax modification. (69.69%)

3. Simplify the tax system: Adopt a simple and fair single-rate tax system by scrapping the internal revenue code and replacing it with one that is no longer than 4,543 words – the length of the original Constitution. (64.9%).

7. Pass an “all-of-the-above” energy policy: Authorize the exploration of additional energy reserves to reduce American dependence on foreign energy sources and reduce regulatory barriers to all other forms of energy creation. (55.5%).
8. Reduce earmarks: Place a moratorium on all earmarks until the budget is balanced, and then require a two-thirds majority to pass any earmark. (55.47%).

The Tea Party Patriots have asked both Democrats and Republicans to sign on to the Contract. No Democrats signed on, and the contract met resistance from some Republicans who since created “Commitment to America”. Brendan Buck, a spokesman for that agenda explained that the Contract is too narrow in focus, and not exactly what the Republican party would include in its own top-10 list of priorities. Candidates in the 2010 elections who signed the Contract from America included Utah’s Mike Lee, Nevada’s Sharron Angle, Sen. Coburn (R-OK), and Sen. DeMint (R-SC).

As with all new organizations, which buck the establishment, you will find a great deal of opposition. Opposition from the Left is inevitable, but it has been the opposition from the right that is most perplexing. While it is understandable that the fear within the Republican establishment of losing their power as well as their “spot” in line running for president, Good Golly Miss Molly!!!!!! the only demographic they won truly in the last election was middle to older white males. I don’t sense a bumper crop of that demographic coming on.

TALK TO ME PEOPLE!  This a a REAL President’s Day discussion…….. Not just the barbecue.

One response to “Angela West Discusses – The Party Most Vilified: The Tea Party Movement – Part 1”