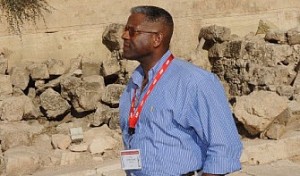 Leadership is a trait known to many, learned by some and perfected by few. It is not something that can be inherited or passed on or even learned in a textbook. It’s about taking responsibility, and has to be earned on a daily basis.

John F. Kennedy perhaps described it best: “Let every nation know, whether it wishes us well or ill, that we shall pay any price, bear any burden, meet any hardship, support any friend, oppose any foe, in order to assure the survival and the success of liberty.”

Ronald Reagan praised Kennedy’s words of wisdom, adding his own: “Freedom is never more than one generation away from extinction. We d didn’t pass it to our children in the bloodstream. It must be fought for, protected, and handed on for them to do the same.”

In December 2009, at an Israel seminar I hosted on security challenges in a radically changing world, I was introduced to a leader bearing the same characteristics of both these great men. I was afforded the privilege of spending several days with Lt. Col. Allen West.

Along with 12 other delegates from Africa, Asia, Australia and Europe, the American military officer’s leadership qualities were instantly apparent.

While discussing the Middle East and Africa, where radicalism and terror has been as much a concern as the cost in human life is alarming, West presented his views on a more violent turbulence that “would surely sweep over Africa, the Middle East and spill off into Europe.” He said it was essential that America was strong on foreign policy because “any signs of weakness shown by the United States would trigger radical Muslim elements into an even more violent campaign.” How right he was, as we have seen the seasons change from an Arab Spring to an Arab storm of carnage and death.

COMPLETE THE REST OF THIS ARTICLE BY CLICKING HERE: BIZPAC REVIEW