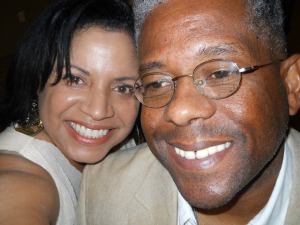 First and foremost, I have been married to Allen West for over 23years. We have NEVER had a bout of violence. I am a wife, mother and businesswoman. During my marriage we have together accomplished a great deal, we married in graduate school and progressed through our professions. I have been published and travelled throughout the world. Both of our daughters are talented in their own respects with the eldest taking two beauty titles in the recent past. The Allen West that we (Aubrey, Austen and myself) know, is very intelligent, well educated, speaks several languages, well travelled, and tireless in his quest to make a difference in this world. We, as a family , volunteer, mentor, and give of our time, effort and personal treasure.

I know that many of you have seen the advertisement put out by Patrick Murphy ‘s campaign or his father or his campaign manager or ………. It really does not matter who put it out from his camp, it was and is offensive. Take a look at the stereotypes:

. A hint of gleaming gold between a gap toothed smile;

. A boxing clad Allen West (he does not box) punching out not one but two white women —- one old and one young (both white).

. Stealing the money from a crying, helpless Black man and his crying helpless son (Really? — That might just be the way that old Tom Murphy would like to see most Black men —- crying and helpless.)

. Then finally, the money shot which is the most vulgar of all.

So, as you know, Allen was interviewed on Fox News this morning , during which he asked an important question: Where are the Black leaders who have no compunction protesting what they feel is considered “racism”? Well, here is a real gem:

NAACP spokesman Hillary Shelton said he watched the ad several times, specifically looking for the concerns raised by West, and saw nothing.

“Racist is not a term I would utilize to sum up this commercial,” Shelton told The Huffington Post. “It looks like a traditional, political, partisan commercial.” 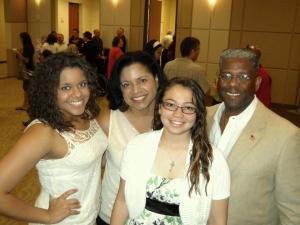 “The language utilized doesn’t present Allen West as a stereotype of an African American,” Shelton said. “The ad has him looking very well groomed, a serious look on his face and he’s wearing a suit. The only thing superimposed is a boxing glove as a symbolic analysis of his policies being inconsistent with the values of retirees, women and African-American families.
OH.MY.GOD.

NO WONDER WE HAVE SUCH PROBLEMS IN THE BLACK COMMUNITY!!! Does this man, Mr. Shelton, even know what policies Allen West represents? Self reliance, self respect, family, education and direction. Not victimhood, as represented by the crying Black man and his son. No, Mr. Shelton, your type is out of style and you are making the NAACP into an irrelevant body. Your type is not new though, Booker T. Washington wrote:

“There is another class of coloured people who make a business of keeping the troubles, the wrongs and the hardships of the Negro race before the public. Having learned that they are able to make a living out of their troubles, they have grown into the settled habit of advertising their wrongs – partly because they want sympathy and partly because it pays. Some of these people do not want the Negro to lose his grievances, because they do not want to lose their jobs.” (p. 118)

No excuses , Mr. Shelton, exist for your ignorant observation. Murphy is what we expected him to be , an opportunist for a weak son; hoping to buy his son job and himself access to greater treasure and business deal in Washington. The casting of the crying Black man and boy are exactly how he views you also. Playing the race card is one of the disgusting tricks of Murphy’s trade, to which he has no excuse. You have no excuse for not seeing this and proclaiming yourself a spokesperson for the NAACP.