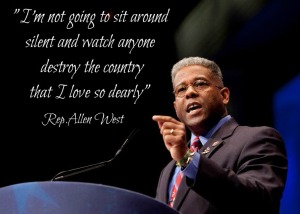 (WASHINGTON) –  Congressman Allen West (R-FL) released this statement today reviewing the first six months of the Second Session of the 112th Congress and his cumulative total of congressional office accomplishments since January 2011:

“The constituents of Florida’s 22nd Congressional district deserve to know exactly what I am doing as I continue to be their voice on Capitol Hill.

I have traveled South Florida over the past 18 months talking with families and small businesses who have been forced to tighten their belts in these economic times.  I promised them, that as a Member of Congress, our office would be doing the same.  Today, I am announcing that I have returned $275,000 from my 2011 budget to the American taxpayers.  This return to the taxpayer is in addition to a six percent cut to the overall 2011 Congressional Office Budget that I voted for during my first few weeks in office.

My pledge to my constituents has never changed.  I will continue to work to improve the fiscal and national security of our nation.  While we still have a lot of work ahead of us, I will continue to be as transparent as possible as to the steps I am taking to ensure the will of the people is heard in the halls of Congress.”