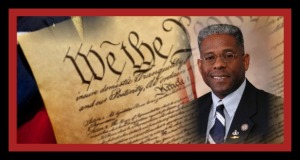 Congressman Allen West blasted Robert Crowder, his Republican opponent in the upcoming 18th Congressional District race. He also took a few swipes at  the Palm Beach Post in a scathing letter that the Post chose to publish on July 3rd.

In the letter, West said he would not accept requests by Crowder to debate him. “I refuse to waste the voters’ time by dignifying Crowder’s cynical political maneuvering.”

West also explained why he refused to interview with the Palm Beach Post editorial board, calling them “elitists so blinded by ideology they are incapable of an intellectually honest discussion ”

He called the board “elites” a second time, describing it as out of touch with its readers.
Referring to the voters, West said, “I will not waste my time and theirs with career politicians who seek office only to feed their egos. Or with panels of self-appointed elites who pontificate about what they believe is best for their readers and the millions of individuals who make our nation so great — yet about whom they truly know so little.”

CONTINUE THE REST OF THE ARTICLE BY CLICKING HERE: BizPacReview.Com