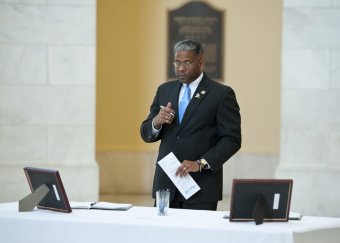 The Sun-Sentinel and reporter Anthony Man did what they normally do on
Saturday, Dec. 17, they published a “hit piece” on Rep. Allen West.
Bill O’Reilly popularized the phrase, “The Spin Stops Here”, but their
spin never lets up, especially on sliming Rep. Allen West on a regular
basis.

To selectively take the words of Rep. West when he said in an
interview; “If Josef Goebbels was around, he’d be very proud of the
Democrat Party because they have an incredible propaganda machine.
Let’s be honest, you know, some of the people in the media are
complicit in this, in enabling them to get that type of message out”,
and to try to turn those words into a slur against Jews or the
Holocaust survivors, is outrageous. In a way, the Sun-Sentinel and
Anthony Man proved West’s contention that the propaganda machine of the
Democrats and their surrogates in the news media, was working as well
as the Nazi smear machine run by that evil propaganda minister, Josef
Goebbel’s, during WWII. Nowhere is his remarks did he denigrate Jews
or the Holocaust, only in the warped minds of the partisan Democrats
and the liberal news media does this “selective outrage” exist.

This is just the beginning of the upcoming vile campaign to get Obama
and the Democrat legislators elected in 2012. They can’t run on their
pitiful record, so they’ll have to resort to engaging in the “politics
of personal destruction” to cover up their ineptitude and their
Marxist/Socialist policies. Being a black Conservative Republican,
makes Rep West a prime target, because he’s not part of the
“plantation” mentality alive and well in Wash. D.C.

COMPLETE THE REST OF THIS GREAT ARTICLE BY CLICKING HERE: Chuckontherightside.com